1. Which of the following is the largest source of water pollution in major rivers of India?
(A) Untreated sewage
(B) Agriculture run-off
(C) Unregulated small scale industries
(D) Religious practices
Answer: A

9. Which of the following statements about the Indian political system is/are correct?
(a) The president is both Head of the State and Head of the Government.
(b) Parliament is Supreme.
(c) The Supreme Court is the guardian of the Constitution.
(d) The Directive Principles of State Policy are justiciable.
Select the correct answer from the codes given below:
(A) (a), (b), (c) and (d)
(B) (b), (c) and (d)
(C) (b) and (c)
(D) (c) only
Answer: D

12. Which of the following core value among the institutions of higher education are promoted by the NAAC (National Assessment and Accreditation Council)?
(a) Contributing to national development.
(b) Fostering global competencies among the students.
(c) Inculcating a value system among students.
(d) Promoting the optimum utilization of the infrastructure.
Select the correct answer from the codes given below:
Codes:
(A) (b), (c) and (d)
(B) (a), (b) and (c)
(C) (a), (c) and (d)
(D) (a), (b), (c) and (d)
Answer: B

13. The best way for providing value education is through
(A) discussions on scriptural texts
(B) lecture/discourses on values
(C) seminars/symposia on values
(D) mentoring/reflective sessions on values
Answer: D

15. Which set of learner characteristics may be considered helpful in designing effective teaching-learning systems? Select the correct alternative from the codes given below:
(i) Prior experience of learners in respect of the subject.
(ii) Interpersonal relationships of learner’s family friends.
(iii) Ability of the learners in respect of the subject.
(iv) Student’s language background.
(v) Interest of students in following the prescribed dress code.
(vi) Motivational-orientation of the students.
Codes:
(A) (i), (ii), (iii) and (iv)
(B) (i), (iii), (iv) and (vi)
(C) (ii), (iii), (iv) and (v)
(D) (iii), (iv), (v) and (vi)
Answer: B

16. A college level assistant professor has planned his/her lectures with an intent to develop cognitive dimensions of students centered on skills of analysis and synthesis. Below, given are two sets of items Set – I consisting of levels of cognitive interchange and Set – II comprising basic requirements for promoting them. Match the two sets and indicate your answer by choosing the correct alternative from the code:
(Levels of Cognitive Interchange)
a. Memory level
b. Understanding level
c. Reflective level
(Basic requirements for promoting cognitive interchange)
i. Giving opportunity for discriminating examples and non-examples of a point.
ii. Recording the important points made during the presentations.
iii. Asking the students to discuss various items of information.
iv. Critically analyzing the points to be made and discussed.
Codes:
a b c
(A) ii iv i
(B) iii iv ii
(C) ii i iv
(D) i ii iii
Answer: C

17. Match the items of the first set with that of the second set in respect of evaluation system. Choose the correct code:
Set – I
a. Formative evaluation with regularity
b. Summative evaluation
c. Continuous and comprehensive evaluation
d. Norm and criterion referenced tests
Set – II
i.Evaluating cognitive and co-cognitive aspects
ii. Tests and their interpretations based on a group and certain yardsticks
iii. Grading the final learning outcomes
iv. Quizzes and discussions
Codes:
a b c d
(A) iv iii i ii
(B) i ii iii iv
(C) iii iv ii i
(D) i iii iv ii
Answer: A

18. Select the alternative which consists of positive factors contributing to effectiveness of teaching:
List of factors:
(a) Teacher’s knowledge of the subject.
(b) Teacher’s socio-economic background.
(c) Communication skill of the teacher.
(d) Teacher’s ability to please the students.
(e) Teacher’s personal contact with students.
(f) Teacher’s competence in managing and monitoring the classroom transactions.
Codes:
(A) (b), (c) and (d)
(B) (c), (d) and (f)
(C) (b), (d) and (e)
(D) (a), (c) and (f)
Answer: D

19. The use of teaching aids is justified on the grounds of
(A) Attracting student’s attention in the class room.
(B) Minimizing indiscipline problems in the classroom.
(C) Optimizing learning outcomes of students.
(D) Effective engagement of students in learning tasks.
Answer: C

22. From the following list of statements identify the set which has negative implications for ‘research ethics’ :
(i) A researcher critically looks at the findings of another research.
(ii) Related studies are cited without proper references.
(iii) Research findings are made the basis for policy making.
(iv) Conduct of practitioner is screened in terms of reported research evidences.
(v) A research study is replicated with a view to verify the evidences from other researches.
(vi) Both policy making and policy implementing processes are regulated in terms of preliminary studies.
Codes:
(A) (i), (ii) and (iii)
(B) (ii), (iii) and (iv)
(C) (ii), (iv) and (vi)
(D) (i), (iii) and (v)
Answer: C

24. A research intends to explore the effect of possible factors for the organization of effective mid-day meal interventions. Which research method will be most appropriate for this study?
(A) Historical method
(B) Descriptive survey method
(C) Experimental method
(D) Ex-post-facto method
Answer: D

26. The format of thesis writing is the same as in
(A) preparation of a research paper/article
(B) writing of seminar presentation
(C) a research dissertation
(D) presenting a workshop/conference paper
Answer: C

Read the following passage carefully and answer question numbers from 27 to 32:
In terms of labour, for decades the relatively low cost and high quality of Japanese workers conferred considerable competitive advantage across numerous durable goods and consumer-electronics industries (eg. Machinery, automobiles, televisions, radios). Then labour-based advantages shifted to South Korea, then to Malaysia, Mexico and other nations. Today, China appears to be capitalizing best on the basic of labour, Japanese firms still remain competitive in markets for such durable goods, electronics and other products, but the labour force is no longer sufficient for competitive advantage over manufacturers in other industrializing nations. Such shifting of labour-based advantage is clearly not limited to manufacturing industries. Today a huge number of IT and service jobs are moving from Europe and North America to India, Singapore, and like countries with relatively well-educated, low-cost workforces possessing technical skills. However, as educational levels and technical skills continue to rise in other countries, India, Singapore and like nations enjoying labour-based competitive advantage today are likely to find such advantage cannot be sustained through emergence of new competitors.
In terms of capital, for centuries the days of gold coin and later even paper money restricted financial flows. Subsequently regional concentrations were formed where large banks, industries and markets coalesced. But today capital flows internationally at rapid speed. Global commerce no longer requires regional interactions among business players. Regional capital concentrations in places such as New York, London and Tokyo still persist, of course, but the capital concentrated there is no longer sufficient for competitive advantage over other capitalists distributed worldwide. Only if an organization is able to combine, integrate and apply its resources (eg. Land, labour, capital, IT) in an effective manner that is not readily imitable by competitors can such an organization enjoy competitive advantage sustainable overtime.
In a knowledge-based theory of the firm, this idea is extended to view organizational knowledge as resource with atleast the same level of power and importance as the traditional economic inputs. An organization with superior knowledge can achieve competitive advantage in markets that appreciate the application of such knowledge. Semiconductors, genetic engineering, pharmaceuticals, software, military warfare, and like knowledge-intensive competitive arenas provide both time-proven and current examples. Consider semiconductors (e. g. computer chips), which are made principally of sand and common metals, these ubiquitous and powerful electronics devices are designed within common office buildings, using commercially available tools, and fabricated within factories in many industrialized nations. Hence, land is not the key competitive recourse in the semiconductor industry.

Based on the passage answer the following questions:
27. What is required to ensure competitive advantages in specific markets?
(A) Access to capital
(B) Common office buildings
(C) Superior knowledge
(D) Common metals
Answer: C

28. The passage also mentions about the trend of
(A) Global financial flow
(B) Absence of competition in manufacturing industry
(C) Regionalisation of capitalists
(D) Organizational incompatibility
Answer: A

29. What does the author lay stress on in the passage?
(A) International commerce
(B) Labour-Intensive industries
(C) Capital resource management
(D) Knowledge-driven competitive advantage
Answer: D

31. Why labour-based competitive advantages of India and Singapore cannot be sustained in IT and service sectors?
(A) Due to diminishing levels of skill.
(B) Due to capital-intensive technology making inroads.
(C) Because of new competitors.
(D) Because of shifting of labour-based advantage in manufacturing industries.
Answer: C

32. How can an organization enjoy competitive advantage sustainable overtime?
(A) Through regional capital flows.
(B) Through regional interactions among business players.
(C) By making large banks, industries and markets coalesced.
(D) By effective use of various instrumentalities.
Answer: D

34. As a teacher, select the best option to ensure your effective presence in the classroom.
(A) Use of peer command
(B) Making aggressive statements
(C) Adoption of well-established posture
(D) Being authoritarian
Answer: C

35. Every communicator has to experience
(A) Manipulated emotions
(B) Anticipatory excitement
(C) The issue of homophiles
(D) Status dislocation
Answer: B

37. Identify the important element a teacher has to take cognizance of while addressing students in a classroom.
(A) Avoidance of proximity
(B) Voice modulation
(C) Repetitive pause
(D) Fixed posture
Answer: B

38. What are the barriers to effective communication?
(A) Moralising, being judgemental and comments of consolation.
(B) Dialogue, summary and self-review.
(C) Use of simple words, cool reaction and defensive attitude.
(D) Personal statements, eye contact and simple narration.
Answer: A

49. Consider the following statement and select the correct code stating the nature of the argument involved in it:
To suppose that the earth is the only populated world in the infinite space is as absurd as to assert that in an entire field of millet only one grain will grow.
(A) Astronomical
(B) Anthropological
(C) Deductive
(D) Analogical
Answer: D

The following table shows the percentage profit (%) earned by two companies A and B during the years 2011-15. Answer questions 51-53 based on the data contained in the table: 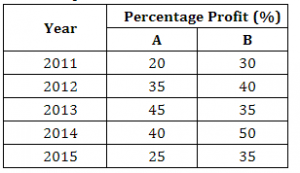 The following table shows the number of people in different age groups who responded to a survey about their favourite style of music. Use this information to answer the questions that follow: (Question 54-56) to the nearest whole percentage: 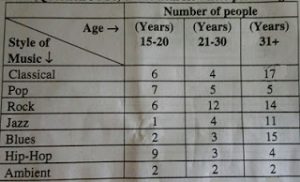 57. An unsolicited e-mail message sent to many recipient at once is a
(A) Worm
(B) Virus
(C) Threat
(D) Spam
Answer: D

60. The process of copying files to a CD-ROM is known as
(A) Burning
(B) Zipping
(C) Digitizing
(D) Ripping
Answer: A