2. MC National University of Journalism and Communication is located at
(A) Lucknow
(B) Bhopal
(C) Chennai
(D) Mumbai
Answer: B

4. In India for broadcasting TV programmes which system is followed?
(A) NTCS
(B) PAL
(C) NTSE
(D) SECAM
Answer: B

10. The basis of the following classification is :
‘first President of India’, ‘author of Godan’, ‘books in my library’, ‘blue things’ and ‘students who work hard’
(A) Common names
(B) Proper names
(C) Descriptive phrases
(D) Indefinite description
Answer: C

11. In the expression ‘Nothing is larger than itself’ the relation ‘is larger than’ is
(A) antisymmetric
(B) asymmetrical
(C) intransitive
(D) irreflexive
Answer: D

14. Determine the nature of the following definition :
“Abortion” means the ruthless murdering of innocent beings.
(A) Lexical
(B) Persuasive
(C) Stipulative
(D) Theoretical
Answer: B

18. Which of the following statements are false ? Choose from the code given below :
1. Inductive arguments always proceed from the particular to the general.
2. A cogent argument must be inductively strong.
3. A valid argument may have a false premise and a false conclusion.
4. An argument may legitimately be spoken of as ‘true’ or ‘false’.
Code :
(A) 2, 3 and 4
(B) 1 and 3
(C) 2 and 4
(D) 1 and 2
Answer: C

The total electricity generation in a country is 97 GW. The contribution of various energy sources is indicated in percentage terms in the Pie Chart given below: 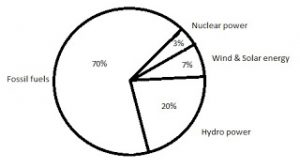 31. Irritation in eyes is caused by the pollutant
(A) Sulphur di-oxide
(B) Ozone
(C) PAN
(D) Nitrous oxide
Answer: C

32. Which is the source of chlorofluorocarbons?
(A) Thermal power plants
(B) Automobiles
(C) Refrigeration and Air-conditioning
(D) Fertilizers
Answer: C

33. Which of the following is not a renewable natural resource?
(A) Clean air
(B) Fertile soil
(C) Fresh water
(D) Salt
Answer: D

34. Which of the following parameters is not used as a pollution indicator in water?
(A) Total dissolved solids
(B) Coliform count
(C) Dissolved oxygen
(D) Density
Answer: D

37. Indian Institute of Advanced Study is located at
(A) Dharmshala
(B) Shimla
(C) Solan
(D) Chandigarh
Answer: B

39. Which of the following rights was considered the “Heart and Soul” of the Indian Constitution by Dr. B.R. Ambedkar?
(A) Freedom of Speech
(B) Right to Equality
(C) Right to Freedom of Religion
(D) Right to Constitutional Remedies
Answer: D

40. Who among the following created the office of the District Collector in India ?
(A) Lord Cornwallis
(B) Warren Hastings
(C) The Royal Commission on Decentralisation
(D) Sir Charles Metcalfe
Answer: B

43. If you get an opportunity to teach a visually challenged student along with normal students, what type of treatment would you like to give him in the class ?
(A) Not giving extra attention because majority may suffer.
(B) Take care of him sympathetically in the class- room.
(C) You will think that blindness is his destiny and hence you cannot do anything.
(D) Arrange a seat in the front row and try to teach at a pace convenient to him.
Answer: D

44. Which of the following is not a characteristic of a good achievement test?
(A) Reliability
(B) Objectivity
(C) Ambiguity
(D) Validity
Answer: C

45. Which of the following does not belong to a projected aid?
(A) Overhead projector
(B) Blackboard
(C) Epidiascope
(D) Slide projector
Answer: B

47. A teacher can be successful if he/she
(A) helps students in becoming better citizens
(B) imparts subject knowledge to students
(C) prepares students to pass the examination
(D) presents the subject matter in a well organized manner
Answer: A

48. Dynamic approach to teaching means
(A) Teaching should be forceful and effective
(B) Teachers should be energetic and dynamic
(C) The topics of teaching should not be static, but dynamic
(D) The students should be required to learn through activities
Answer: D

49. The research that aims at immediate application is
(A) Action Research
(B) Empirical Research
(C) Conceptual Research
(D) Fundamental Research
Answer: A

50. When two or more successive footnotes refer to the same work which one of the following expressions is used?
(A) ibid
(B) et.al
(C) op.cit :
(D) loc.cit.
Answer: A

51. Nine year olds are taller than seven year olds. This is an example of a reference drawn from
(A) Vertical study
(B) Cross-sectional study
(C) Time series study
(D) Experimental study
Answer: B

52. Conferences are meant for
(A) Multiple target groups
(B) Group discussions
(C) Show-casing new Research
(D) All the above
Answer: D

54. Research ethics do not include
(A) Honesty
(B) Subjectivity
(C) Integrity
(D) Objectivity
Answer: B

Read the following passage carefully and answer the questions 55 to 60:
James Madison said, “A people who mean to be their own governors must arm themselves with power that knowledge gives.” In India, the Official Secrets Act, 1923 was a convenient smokescreen to deny members of the public access to information. Public functioning has traditionally been shrouded in secrecy. But in a democracy in which people govern themselves, it is necessary to have more openness. In the maturing of our democracy, right to information is a major step forward; it enables citizens to participate fully in the decision-making process that affects their lives so profoundly. It is in this context that the address of the Prime Minister in the Lok Sabha is significant. He said, “I would only like to see that everyone, particularly our civil servants, should see the Bill in a positive spirit; not as a draconian law for paralyzing Government, but as an instrument for improving Government-Citizen interface resulting in a friendly, caring and effective Government functioning for the good of our People.” He further said, “This is an innovative Bill, where there will be scope to review its functioning as we gain experience. Therefore, this is a piece of legislation, whose working will be kept under constant reviews.”
The Commission, in its Report, has dealt with the application of the Right to Information in Executive, Legislature and Judiciary. The judiciary could be a pioneer in implementing the Act in letter and spirit because much of the work that the Judiciary does is open to public scrutiny, Government of India has sanctioned an e-governance project in the Judiciary for about Rs 700 crores which would bring about systematic classification, standardization and categorization of records. This would help the judiciary to fulfil its mandate under the Act. Similar capacity building would be required in all other public authorities. The transformation from nontransparency to transparency and public accountability is the responsibility of all three organs of State.

55. A person gets power
(A) by acquiring knowledge
(B) from the Official Secrets Act, 1923
(C) through openings
(D) by denying public information
Answer: A

56. Right to Information is a major step forward to
(A) enable citizens to participate fully in the decision making process
(B) to make the people aware of the Act
(C) to gain knowledge of administration
(D) to make the people Government friendly
Answer: A

57. The Prime Minister considered the Bill
(A) to provide power to the civil servants
(B) as an instrument for improving Government-citizen interface resulting in a friendly, caring and effective Government
(C) a draconian law against the officials
(D) to check the harassment of the people
Answer: B

58. The Commission made the Bill effective by
(A) extending power to the executive authorities
(B) combining the executive and legislative power
(C) recognizing Judiciary a pioneer in implementing the act in letter and spirit
(D) educating the people before its implementation
Answer: C

59. The Prime Minister considered the Bill innovative and hoped that
(A) It could be reviewed based on the experience gained on its functioning.
(B) The civil servants would see the Bill in a positive spirit.
(C) It would not be considered as a draconian law for paralyzing Government
(D) All the above
Answer: D